We want to share a few stories of opportunities Mike has had to share Jesus here in Nicaragua.  Please read about these individuals and join us in praying for them.

Then Ananias answered, “Lord, I have heard from many about this man, how much harm he has done to Your saints in Jerusalem.  And here he has authority from the chief priests to bind all who call on Your name.”  But the Lord said to him, “Go, for he is a chosen vessel of Mine to bear My name before Gentiles, kings, and the children of Israel.” 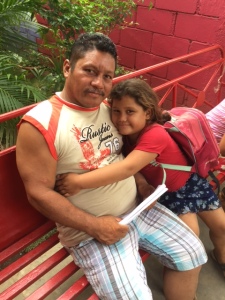 Two days ago I was standing outside the club/school. I glanced over and saw a man waiting for his daughter. I went over to speak with him and he began to tell me a story. He began by saying, “My refrigerator use to be a small thermos that I would occasionally fill with ice to keep things cold. My bed use to be an old door that I would lay flat and sleep on. My stove use to be three rocks and some wood. My shower use to be three pieces of plastic hung up to block people from watching me bathe. My source of water use to be me walking to fill buckets and bring them to my house….” Alvin went on painting this picture of what life use to be for him when he lived in the dump. He said he use to have to rummage through the trash to find things to sell and things to feed his family. As Alvin was talking something in me began to say, “I think I know this guy?” So I asked him if he knew me, and he said, “Of course I know you, that’s why I’m talking to you.” I said, “Did you use to live in the front of the dump on the left hand side?” He said, “ Yes.” It was then, I knew I remembered him for sure. I said to him, “It must have been 10 years since I last saw you.” Alvin corrected me and proceeded to say, “No, it’s been eight years.” He then went on to tell me, “Of course I remember you. You saw me getting rotten left over chicken from the dump and taking it to serve it to my family. When you saw that, you told me not to eat the rotten chicken. You gave me money and told me to feed my family with real food.” Alvin began to share that since then the Lord has done amazing things in his life. Alvin described how he use to stab and shoot people and how he use to be in a gang (at this point he pulled up his sleeve to show me the tattoo). He said he use to drink, smoke, do drugs and fight. But a radical change had occurred. He said that the Lord had completely changed his life. At that point, Alvin invited me to come see his house, so we hopped in my truck and drove to his place. He showed me his wonderful new home in the new community. He showed me how the Lord has blessed his life in so many ways since he decided to give up his sin and follow Jesus. We sat down for a moment and began to talk about the Lord. I grabbed my Bible from the truck and we began to have a Bible study right then and there. It was such sweet fellowship. I can see that Alvin is hungry for more of God’s word. At the end, he asked me to come back and do this (Bible study) again.

Alvin’s testimony made me think of Saul/Paul. He had been a murderer yet when Jesus touched him, his life was radically changed.  The same God who delivered Paul is the one who has delivered Alvin and is working through his life.  “Jesus Christ is the same yesterday, today and forever” (Hebrews 13:8).  Please pray for Alvin and his family. That they would continue to grow and be a light in the midst of their community.

This week, there is a missions team from the U.S. serving at the school.  One of the team members is a young youth guy.  While working with him, I sensed the need to ask him, “Why are you on this missions trip?” His response was that he wanted to help people. I asked him if he was a Christian and went to church, to which he said, “No.”. He said that he believed that there was something out there, and that we didn’t just come from nothing, but he didn’t know what/who that was. I then went on to ask him, “Do you want to know who that Someone is?” And he said, “Sure.” I was able to talk with him for about 30 minutes sharing who God is and assuring Him that God loved him. I shared about the history of redemption and gave him the gospel message. Later on I found out that this young man had talked to his parents about the conversation we had. That evening, his dad thanked me saying, “You were able to do more for my son in a few minutes than we have been able to do in 4 years.”

Please pray for this young man–that as he goes back to the states he continues to seek Truth with an open heart and that he would give his life to Jesus.

I was standing outside the club last night. This middle-aged man came stumbling up to me asking me for money. He was holding an open bottle of alcohol in his hand and halfway spilling it on the ground. He asked me for money to which I said, “No.” He began to explain to me that he was gay and that people beat him some times because they think its funny. I began to firmly explain to him that nothing in this life will satisfy him. I told him that he could keep searching and looking in all the wrong places for satisfaction, but that nothing would ever meet that need in his life, apart from God. I shared the gospel with him and asked if he knew where he was going when he died. Tears rolled down his eyes and with his slurred speech told me he did not want to go to hell. He explained that he was dying of aids and was drinking away his sorrow. I asked him if he wanted to know 100 % sure that he would go to heaven when he died and he said yes. He kept motioning for me to talk quieter for fear of the people around, but I told him this was nothing to hide or be ashamed of. I asked him to pray with me. He lifted his head up with his eyes closed and arms lifted up and prayed to receive Jesus as his personal Lord and Savior. A minute later we were talking amongst a few of the “gringos” from the mission team that was visiting. This man William still had the bottle of alcohol in hand and began to take a large gulp with it dripping down his face. I loudly told him, “This alcohol is going to taste bitter now, because only God will satisfy.” He began to cough over and over and over again. I kept telling him that he needed to throw it out, get rid of it and be done with it. At that point, he chucked the bottle on the ground and everyone around clapped for him.

I ask that you please pray for William. Pray that God would bring the gospel message to remembrance when he is sober and that his life would truly be changed for eternity.

Last night as I was arriving home, there was a young boy sitting near the guard shack at the entrance to our community. The boy must have been about 12 years old. The guard began to explain to me that the boy had just been robbed at knife point, and had no money or way to get home now. I was able to give him a ride home and share the gospel with him, and explain to him how much God loves him and wants to comfort him in this crazy time of his life. He was super shaken up, but received the encouragement well.
Pray for Angelito and his family, that this incident would lead them to Jesus and that they would know how much He loves them.

These testimonies are examples of how important it is to share the truth of God’s word and His love to those around you.  We cannot compromise those moments where the Lord says, “Please share my love with this person; tell them all about Me.”

There is an incredible need here in Nicaragua (and worlwide!).  God is stirring up my heart immensely for those that I am meeting. His gospel must be preached and His word must be taught. Pray for wisdom and clarified vision. Pray for strength and protection. We love you all.

We are a family of four, blessed with the opportunity to share the love of Jesus in Nicaragua.  We covet and appreciate your prayers.